Since 2018 I've been Design Director at OneSignal. 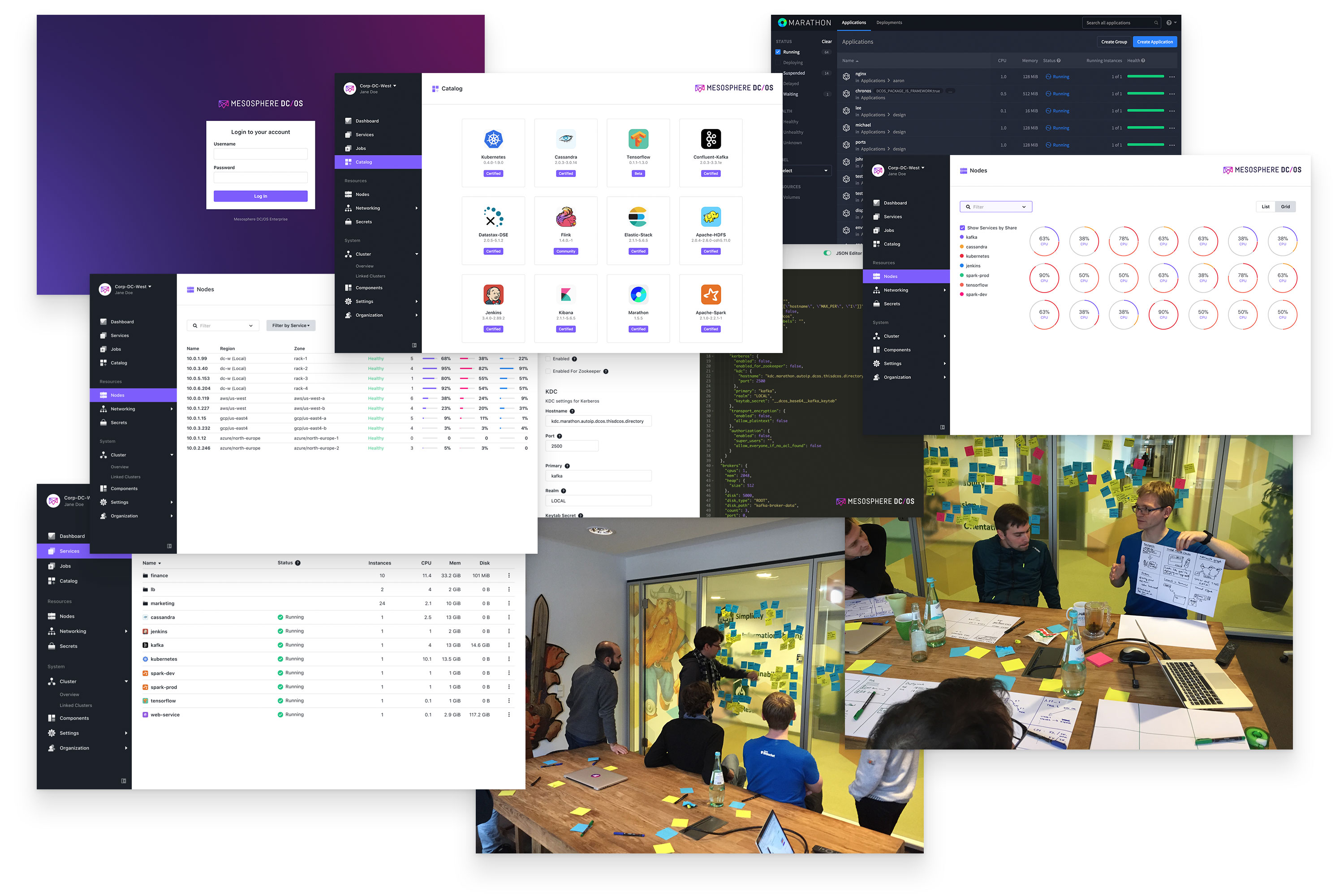 I joined Mesosphere in 2015 where I lead and manage the Product Design team. Responsible for managing the team, our projects, recruiting designers and frontend engineers, designing the user experience of our product (DC/OS) including the user interface, design system, CLI and user research program, and most importantly evangelizing design thinking and UX across the company. Working closely with Product Management and Engineering to ship quality software for enterprise Fortune 500 customers.

Here's an insight into the design stack we use, our product design workflow and how I set up our user testing program. 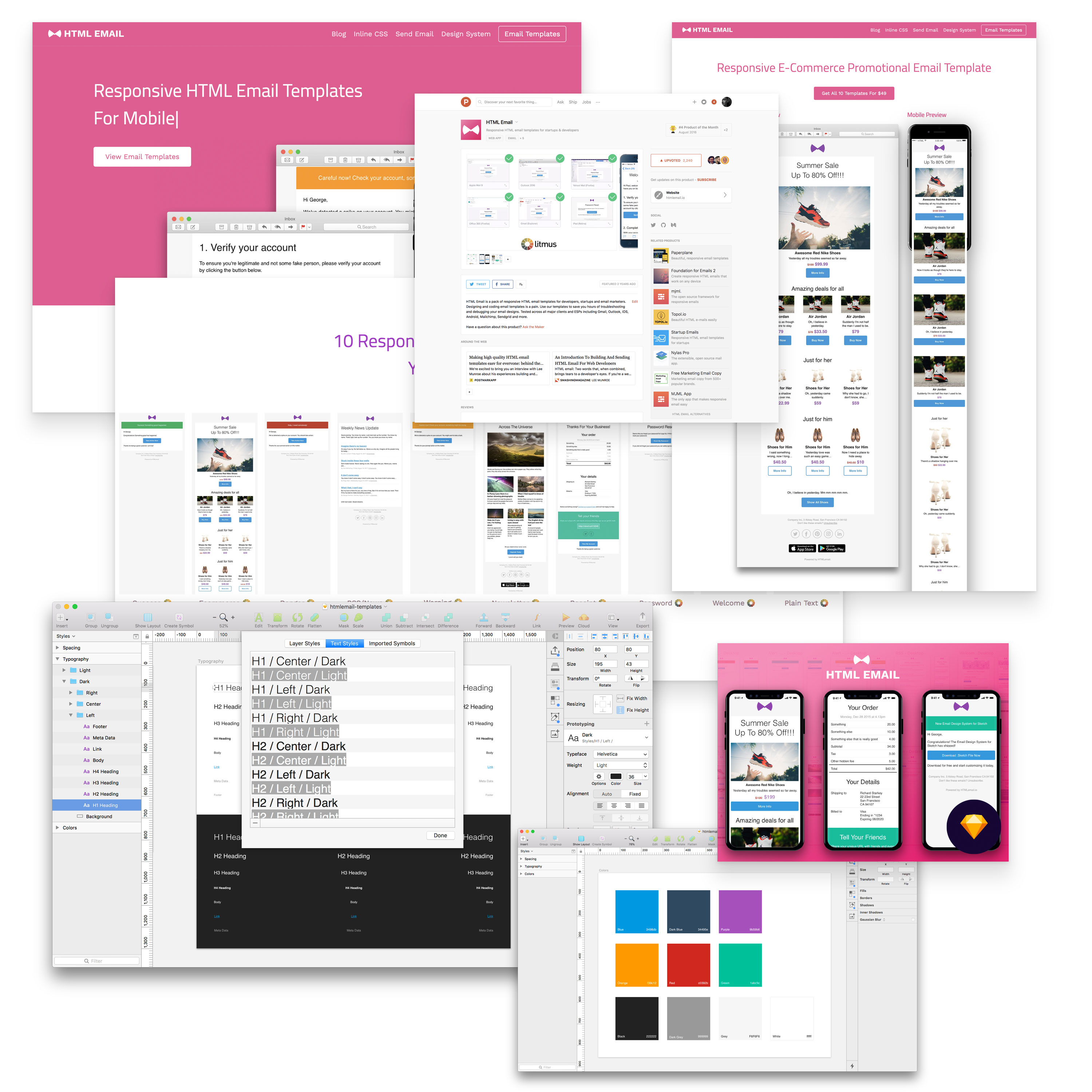 In 2016 I shipped HTML Email, a pack of email templates for developers and startups. This product evolved through a series of MVP blog posts and open source email tools. On launch day it was #1 on Product Hunt, in the first 2 years had more than 900 customers, and traffic of over 10,000 users per month.

As well as email templates the site also includes some useful tools for developers and designers including a CSS inliner and a Sketch design system.

You can read an interview I did with Postmark about how I got the product up and running. 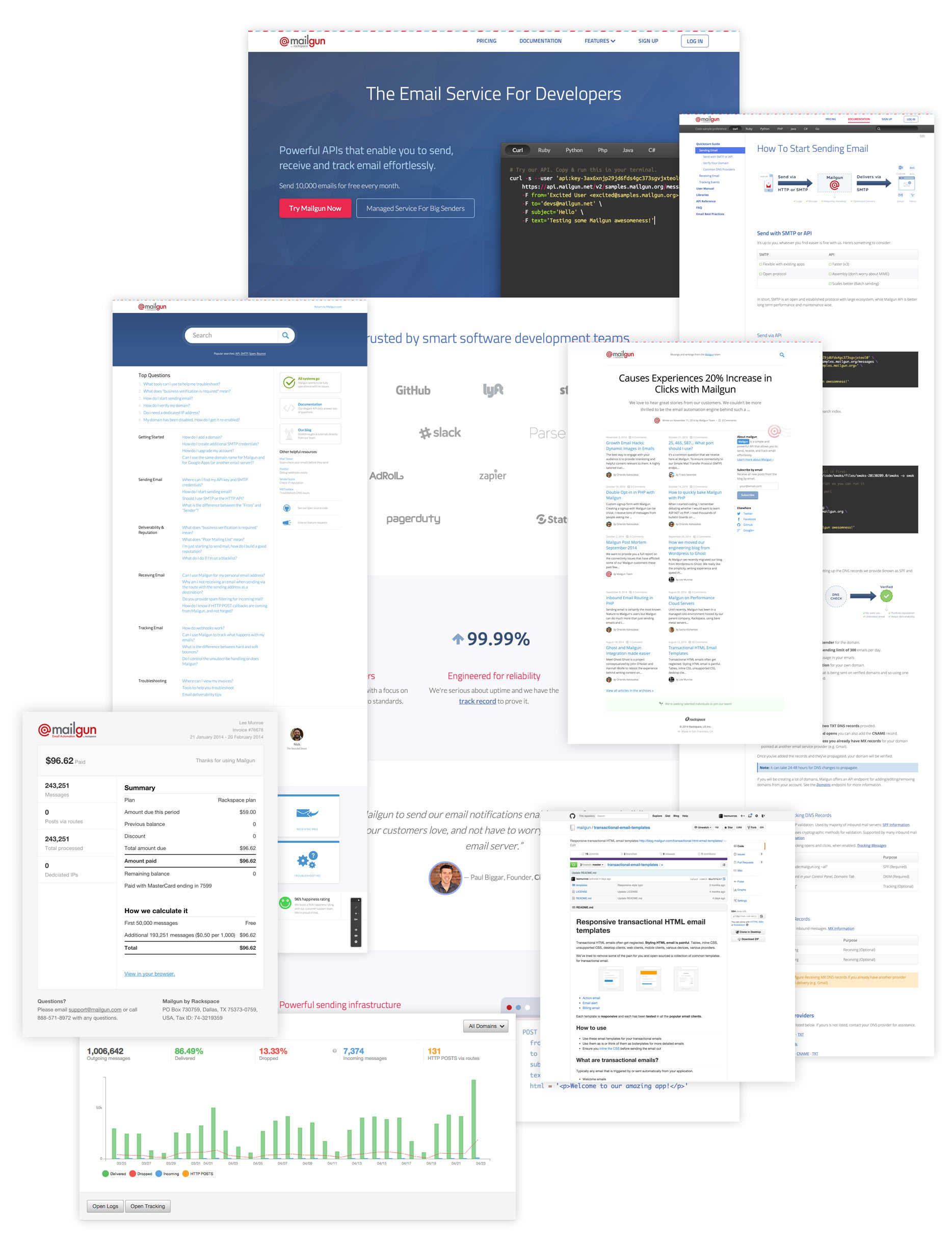 I joined Mailgun in 2013 as their first design and UI hire on a team of 10 engineers. Mailgun is an email service for developers, an API for sending and receiving email, with customers including GitHub, Stripe and Slack. After having gone through Y-Combinator the company was acquired by Rackspace. 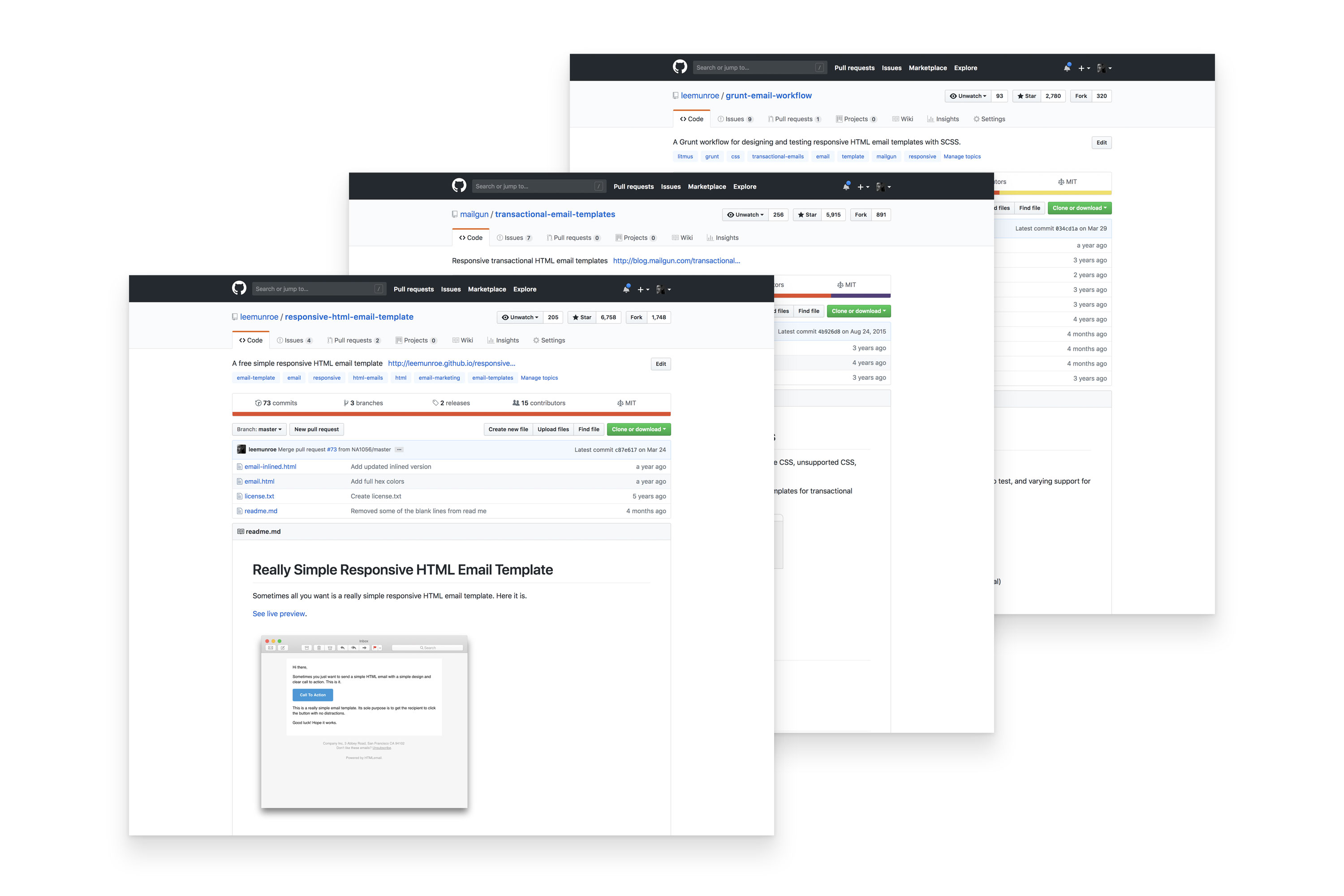 I've long been sharing tips and techniques on web design and development. In recent years I've taken to GitHub to share full projects and resources that I think other designers and developers will find useful.

Working on developer tools like Runnable and Mailgun I've been inspired to open-source a lot of the stuff I work on, enabling others to make use of them but also contribute back or discuss implementation and best practices.

You can find a bunch of my projects on GitHub, a lot of which are related to email design and development.

Share code real time with other developers. I made this code sharing tool using Firebase, Node.js and Express (see original HN post). The purpose of this project was to learn Node.js, which my team were using at the time, and it gave me a chance to experiment with the Firebase API and WebRTC. I've since worked with a team to help scale the tool.

Copy/paste and share real-time code snippets with others. If you share the url with a friend they will see your code as you type it. As of 2018 Codeshare has 100,000 active monthly users. Companies use it for sharing code between teams, coducting interviews, and for teaching others how to code. 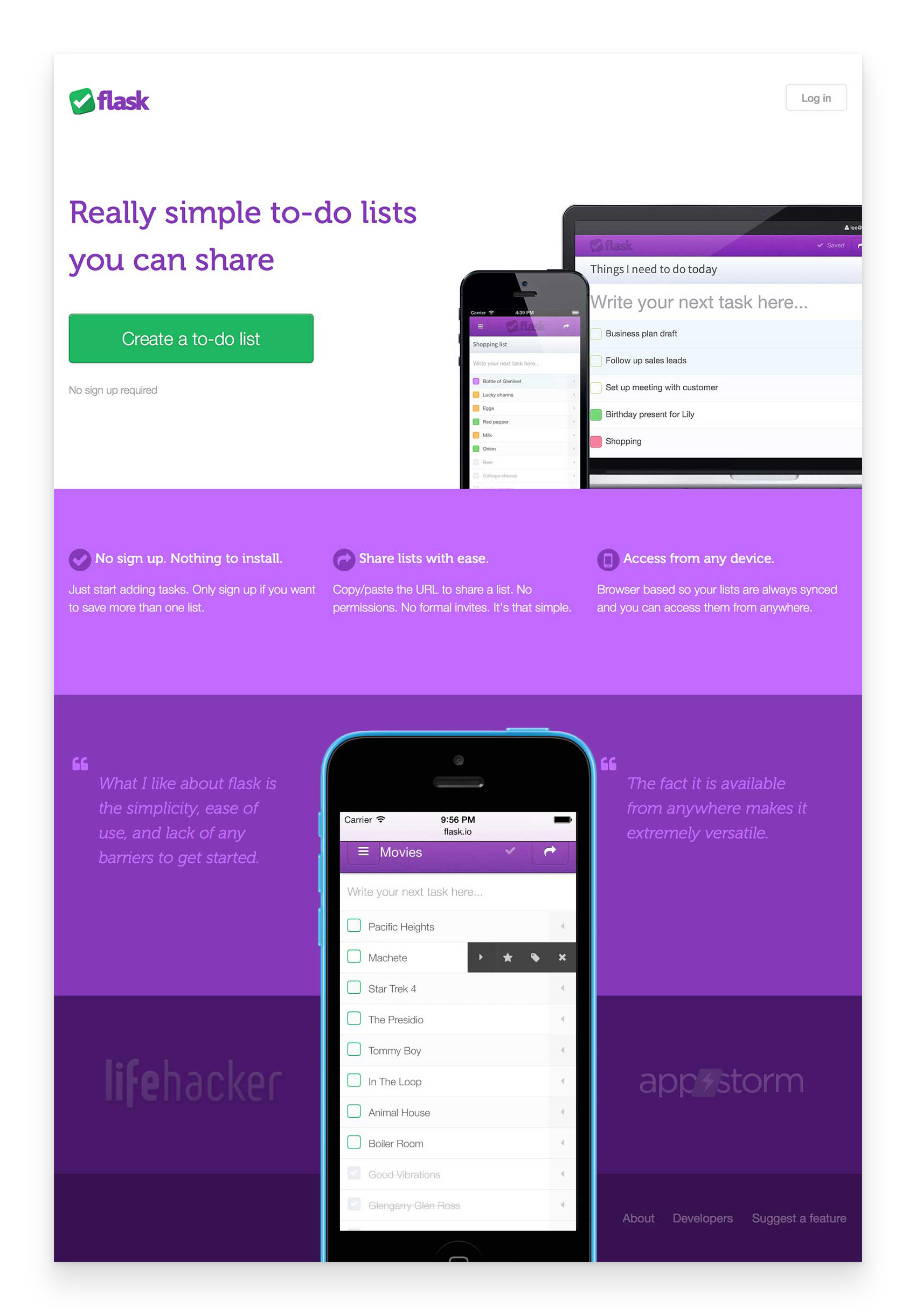 Create really simple and sharable to do lists with Flask. No sign up. Nothing to download. Just add tasks. A simple productivity tool for getting things done and sharing lists with friends. Featured in LifeHacker here.

Flask is a side project that I designed and developed with Ruby on Rails. It started off as a weekend experiment to learn CoffeeScript. Then I used it as a playground to experiment with new ideas, 3rd-party tools and keep my development skills up to scratch.

I wrote a blog post about how you should always have a side project as an experimental playground.

After a couple of years of user growth I sold Flask to another software company. 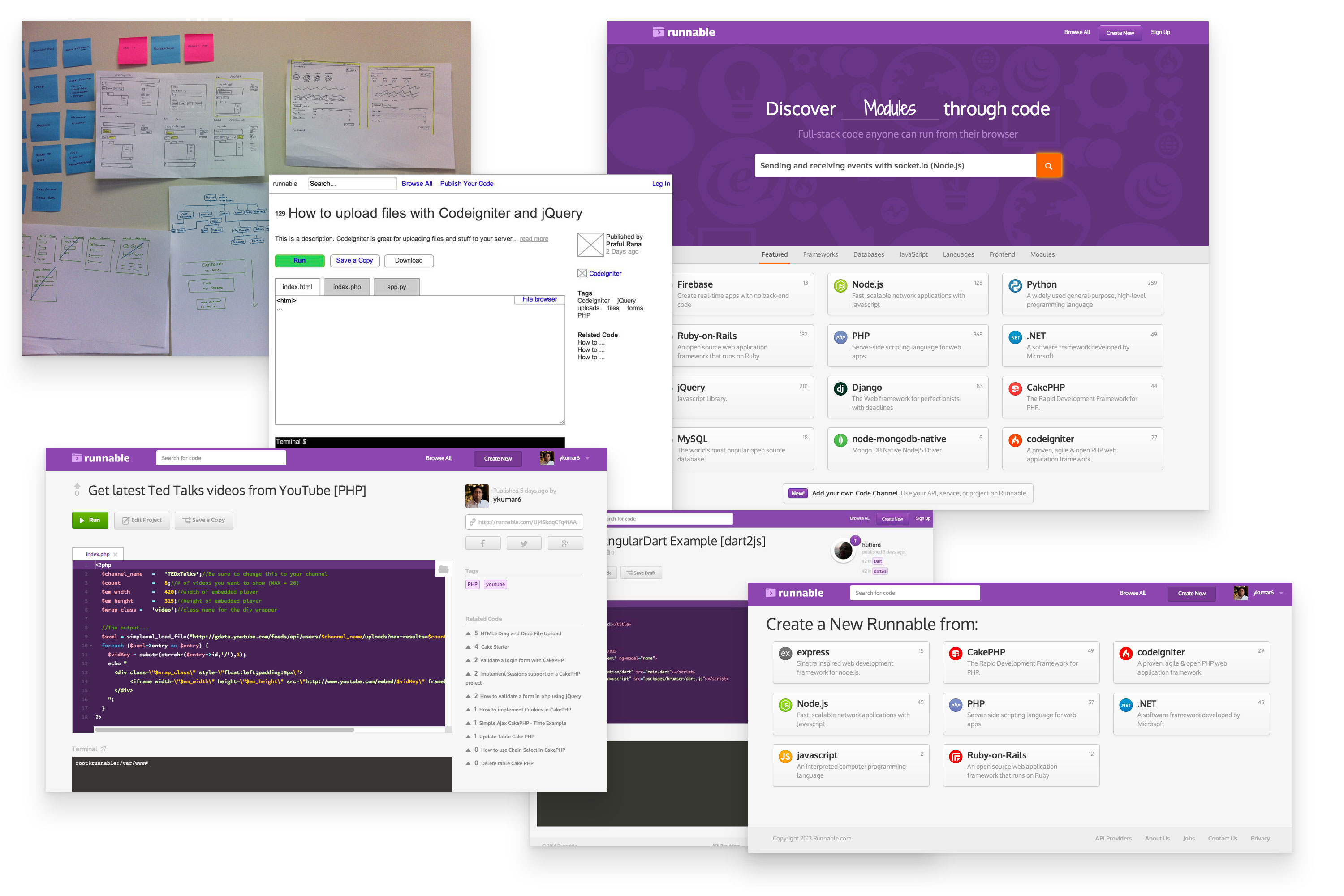 In 2012 I joined Runnable, based in Palo Alto, becoming a member of the founding team. Runnable enabled developers to run server-side code in the browser. No downloading, nothing to install, no registration, just run code.

As an early stage lean startup, I spent a lot of time running experiments, talking to users and making good use of tools like Mixpanel, Optimizely and Qualaroo to help us undertand our user base, validate assumptions and determine the product roadmap, while tackling any design related tasks that needed done.

Runnable later pivoted to a development staging tool for teams then got acquired by MuleSoft (and subsequently Salesforce). 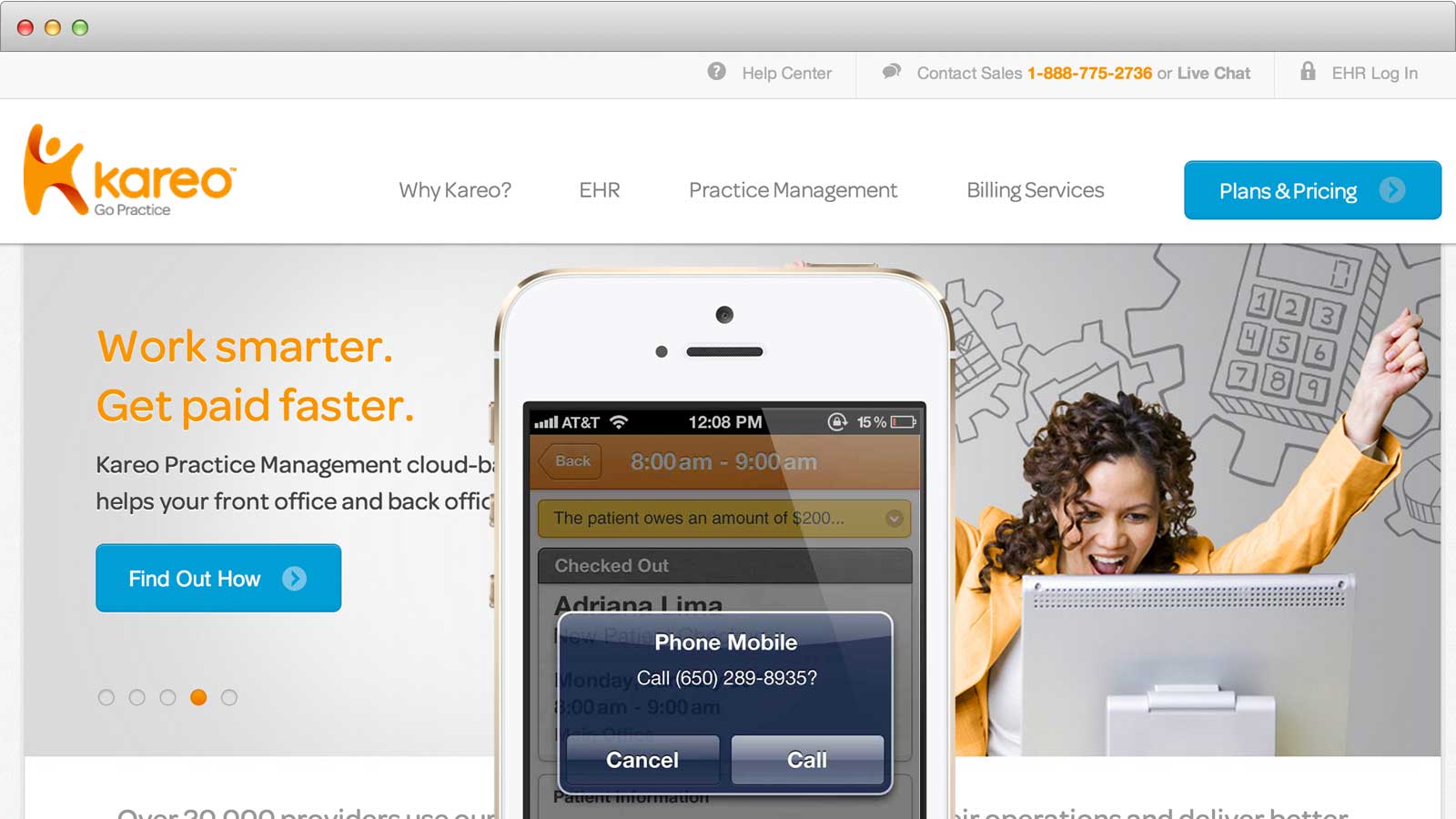 Based in Irvine, Orange County CA, Kareo develop EHR and Practice Management software. I joined as their first design hire, then recruited and managed the UX team, helping them transition from a desktop to web application, and introducing their first iOS app. The company grew from 40 to 200 people during that time. 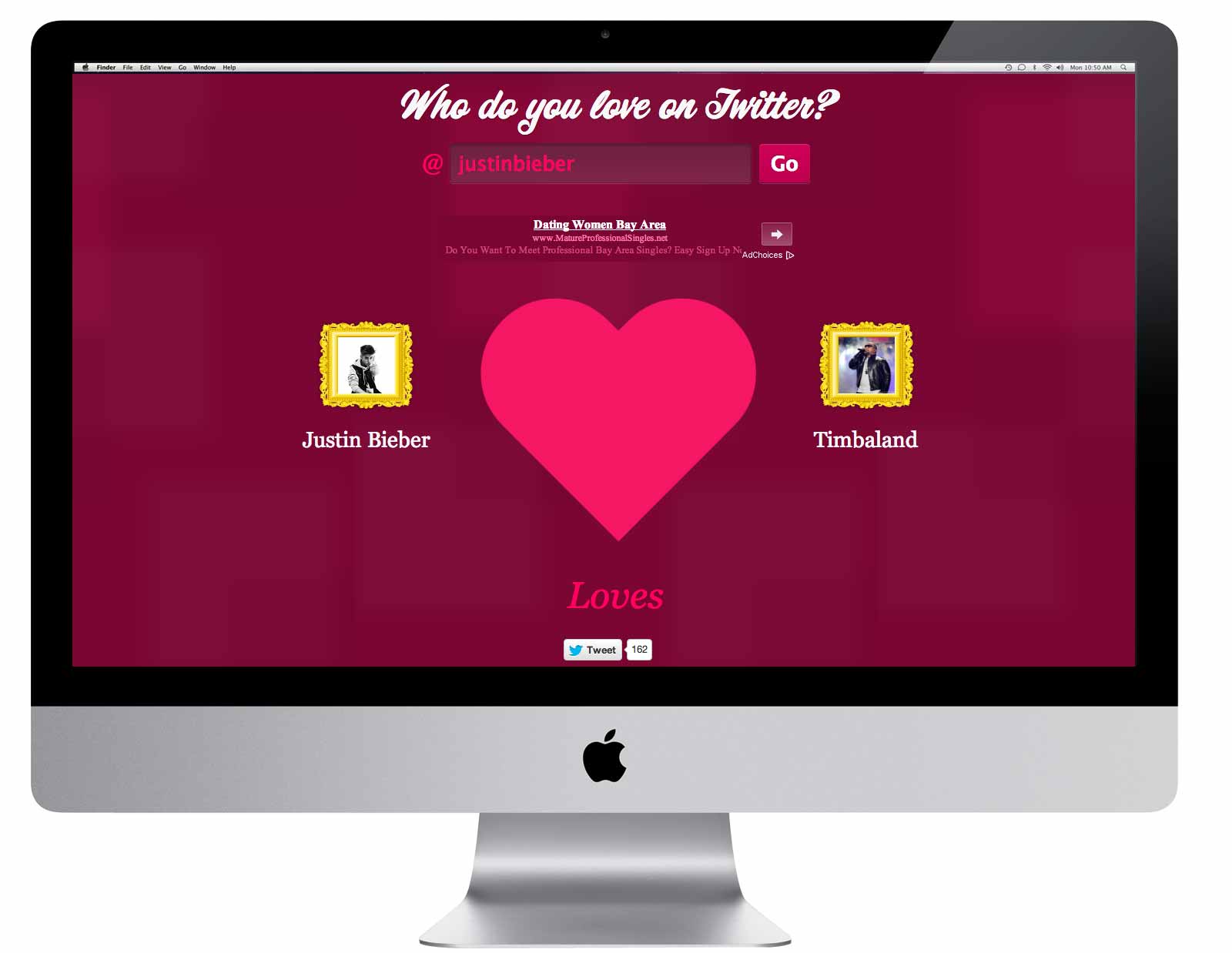 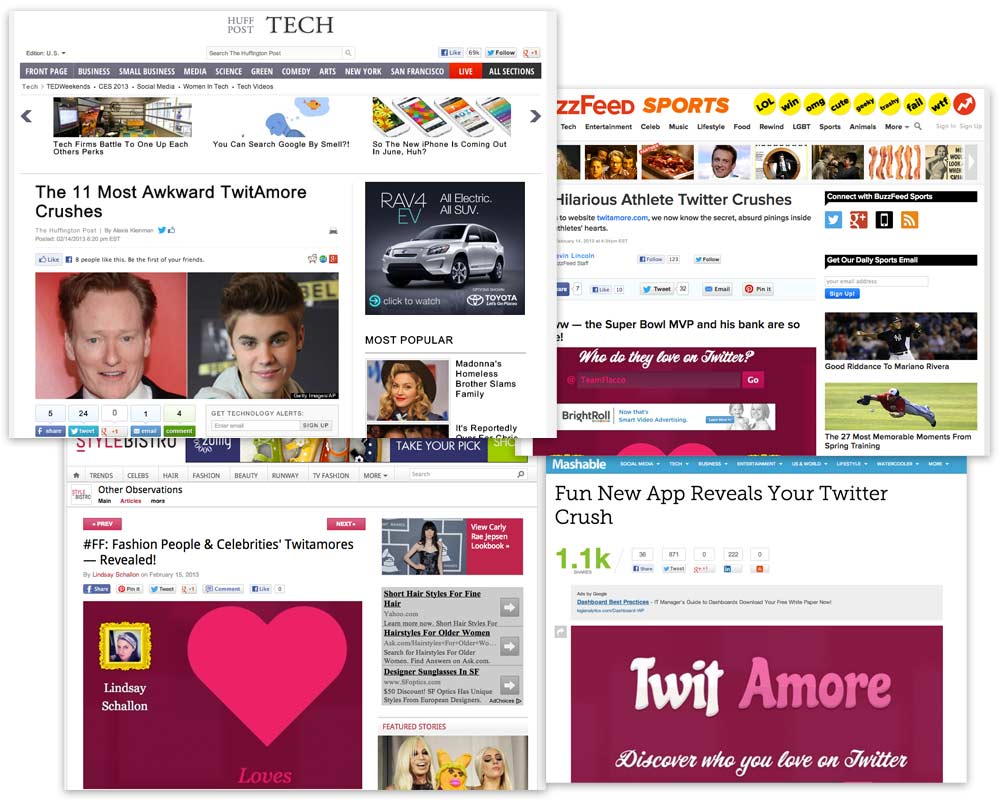 TwitAmore was a side project of mine that went live on Valentine's Day 2012. It's a gimmicky website that tells you who you love on Twitter. I used it as an experiment to improve my Ruby on Rails skills, along with Haml, Sass, using the Twitter API and it was my first project using Heroku as a host.

Due to the tie in with Valentine's Day the site went viral and managed to get on the front page of Mashable, The Next Web and Huffington Post among others. The site received over 1 million unique visitors in 2012.

I later sold TwitAmore to an online dating service. 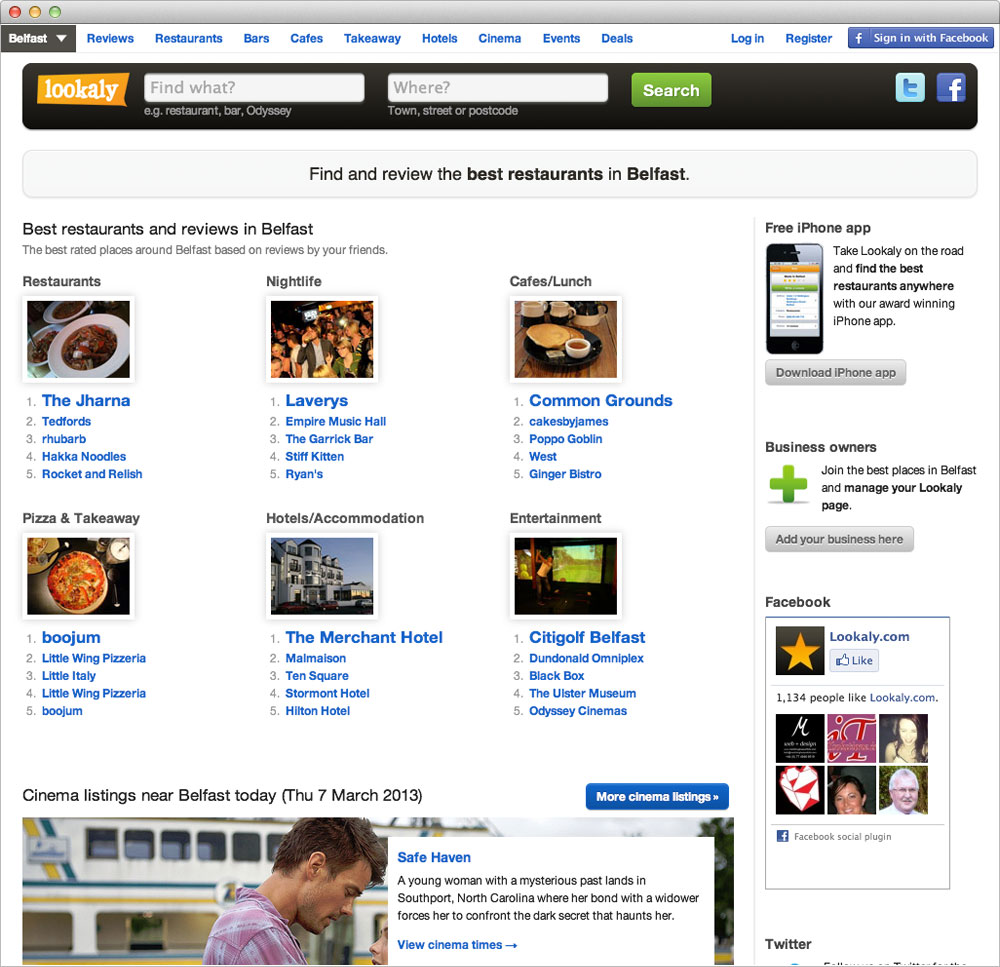 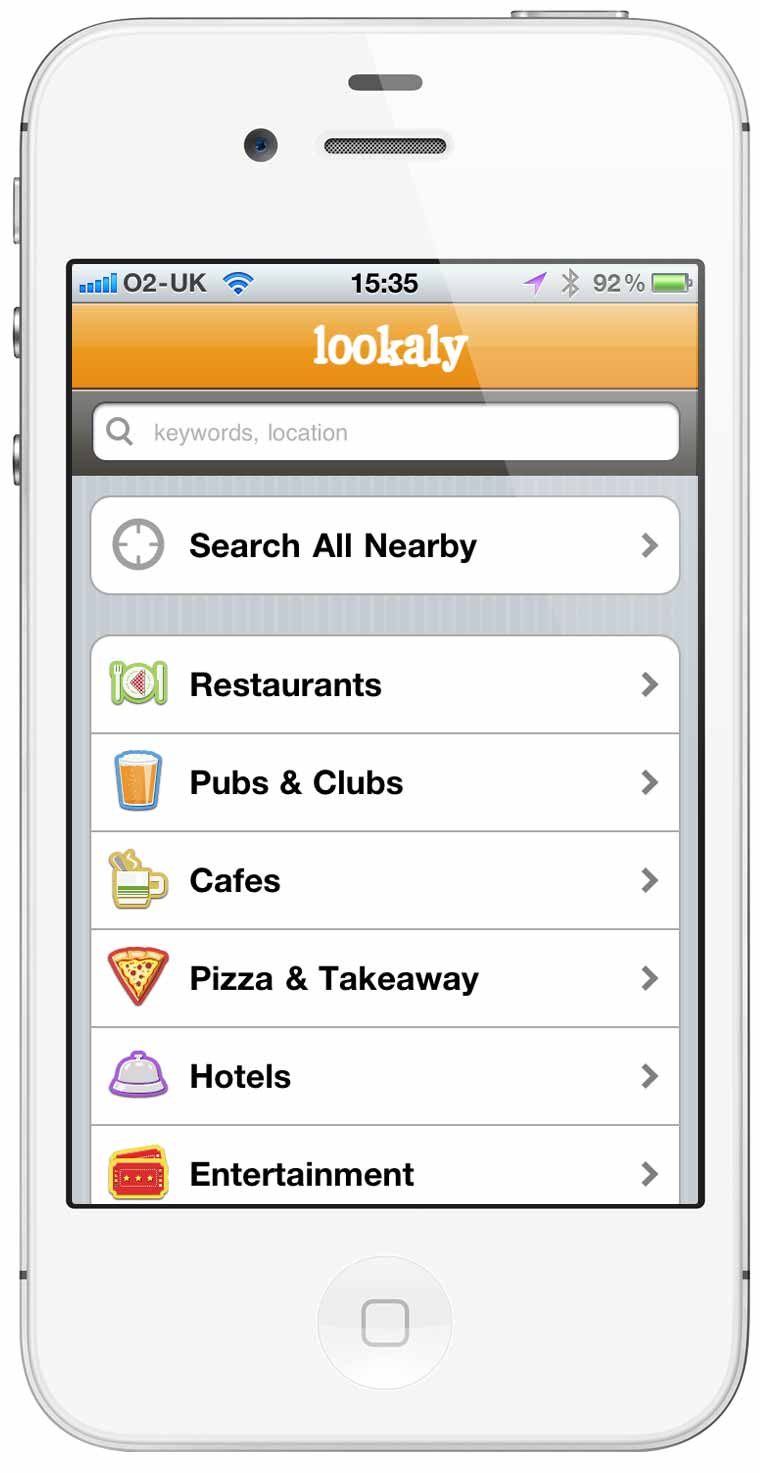 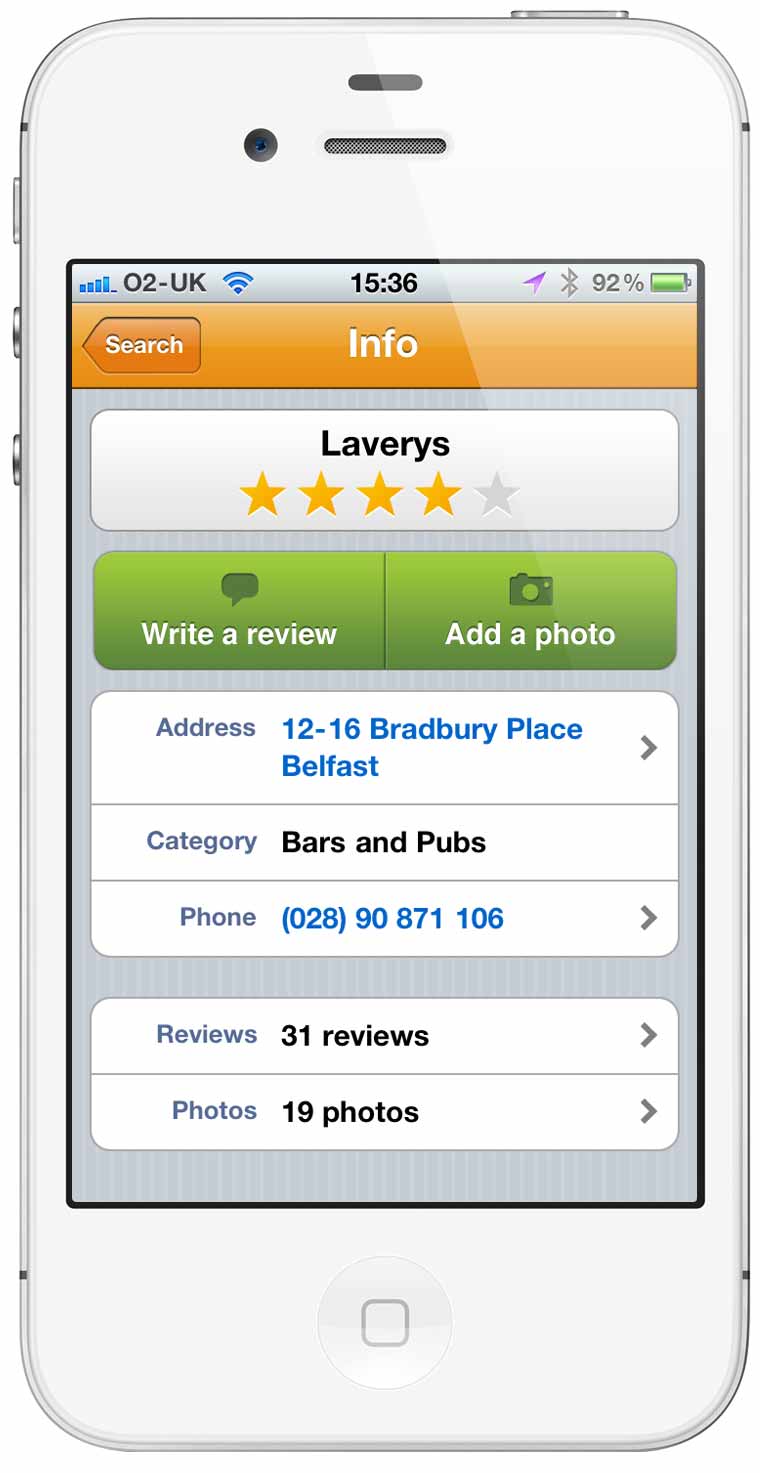 I started Lookaly while completing a Masters at University of Ulster. You could describe Lookaly as Yelp for Ireland. As one of two Founders I was in charge of many things including design, product, marketing, sales and operations.

The site was well received in Northern Ireland attracting over 40,000 unique visitors per month, and the iPhone app earned a DANI award in 2011 for App of the Year.

Due to increasing competition in this space from the likes of Yelp, Google, Facebook and TripAdvisor we eventually closed Lookaly to focus on other projects. 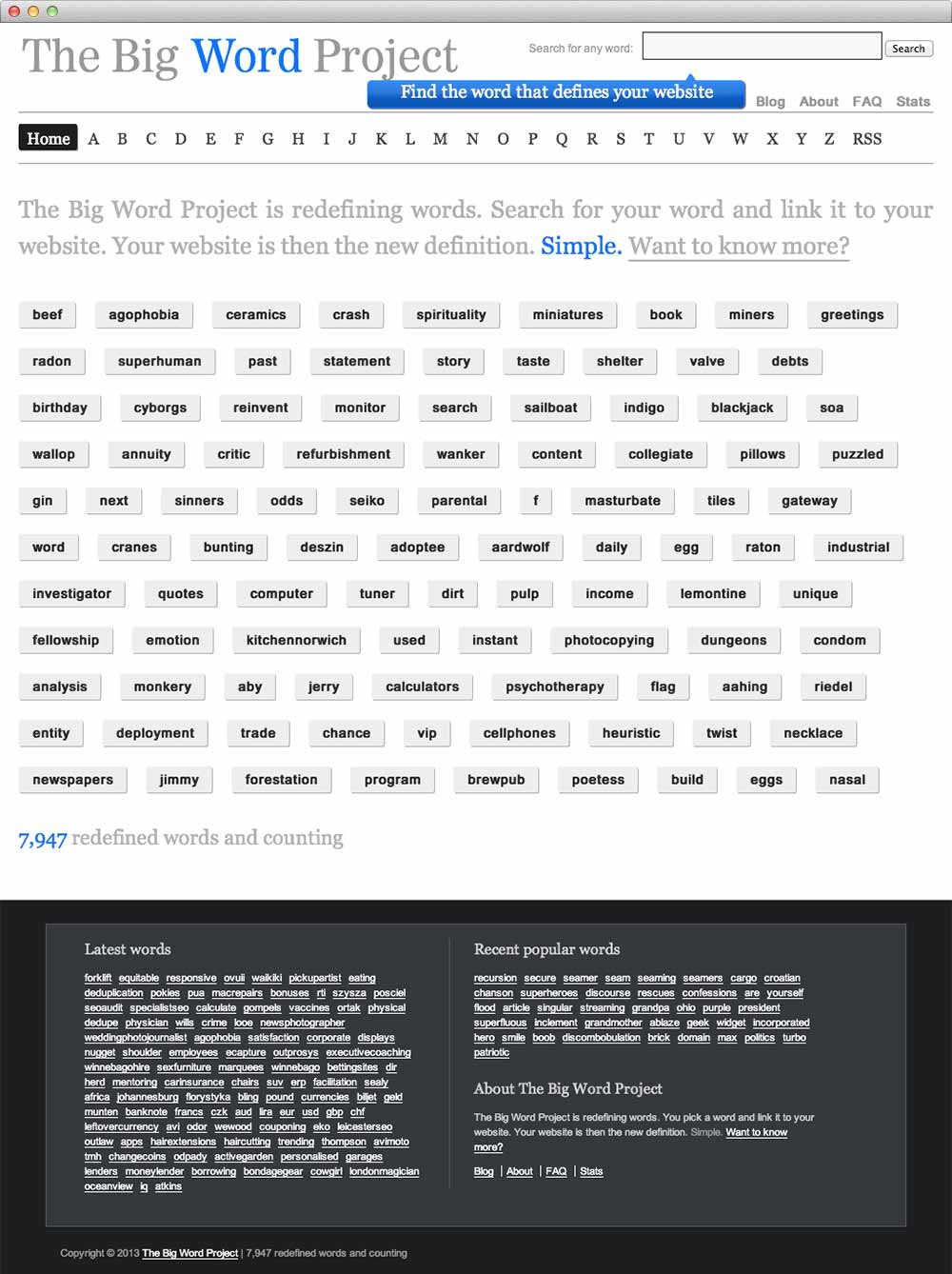 While at University I teamed up with Paddy Donnelly and created a website that let people buy words of the dictionary, priced at $1 per letter, and link them to their website.

It was a viral success. We managed to sell over 7,500 words, with endorsements from the likes of John Gruber, and it led to a feature article in Wired magazine, April 2008.

Over 10 years later the site still survives and sells words to this day.